ε-Polylysine is a natural, safe and healthy antibacterial food preservative. It has obvious inhibition to gram-positive bacteria and gram-negative bacteria, yeasts, viruses, etc. Generally, it takes effect when the concentration reaching 50μg/ml. Therefore, it is widely used as an antistaling agent. Meanwhile, experiments show that it has few side effect as it can be decomposed into lysine in the human body.

In recent years, ε-polylysine is gaining more attention from the food industry due to its unique properties. Against the background of governments' stricter control on chemical preservatives and increasing demand for healthy food, the application of polylysine and other natural preservatives is expected to keep expanding.

Our ε-Polylysine is produced from the fermentation process by using streptomyces albulus under aerobic conditions. Raw materials and processing aids are all of food-grade quality. 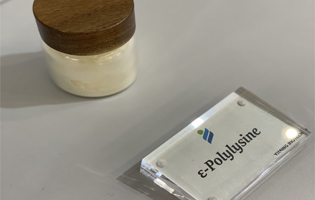 Several kinds ofε-poly-L-lysine, one is pure product, the other is 50:50 or 25% w/v aqueous solution mixed with maltodextrin powder, the common form is it The hydrochloride. The following are the corresponding two manufacturing processes:

The main mechanism of ε-polylysine is described as follows:

ε-Polylysine is a highly polymerized multivalent cation (positively charged), which interacts and binds with the negatively charged microbial cell membrane and forms holes in the membrane.